As many residents are aware, a marijuana shop is located at 1108 Richards (Weeds). According to the city’s by-laws, this location does not qualify to be a marijuana dispensary because of its proximity to a community centre and another marijuana store. The proximity of the children’s playground at Emery Barnes Park is also a concern as the marijuana shop has become a location with many smokers loitering and consuming outside.

Weeds has submitted a development permit to remain in the location and needs to apply for a variance. As a community group we would like to see the store further away from vulnerable populations at the community centre and playground.

Greater Yaletown residents are encouraged to email the project manager Peivand.Sheikhakbari@vancouver.ca before March 29th stating that they oppose the development application. 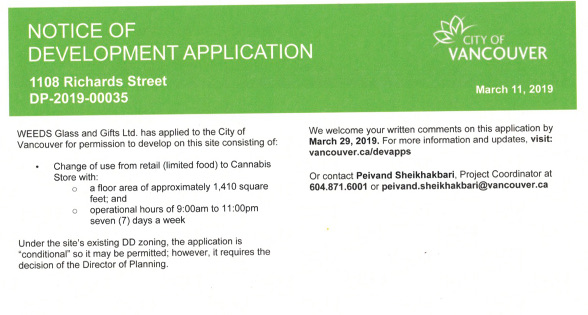